A message board for the paddlesports community

Back in the Day - Old Photos

Sir Whatever! You asked!!!

http://www.ozarkpages.com/cgi-bin/crfind.pl?Rattlesnake" onclick="window.open(this.href);return false;
I am I plus my surroundings and if I do not preserve the latter, I do not preserve myself. Jose Ortega Y Gasset

The earth is like a spaceship that didn't come with an operating manual.
Buckminster Fuller
Top

That there Norse paddle was one of toughest sob's to ever be built. I'd recognize that design anywhere. I had one till I sold it. It was heavy but the blade could be used as a shovel to dig a rig out of the snow.

Hey Shelby, I still have that Norse paddle. I broke one of the blades way back in 1982 but I patched it with with fiberglass and it still works! I agree, you had to have muscles to use both the Kayak and Canoe Norse Paddles. I have not used the paddle in over 25 years, but I figure it will be worth something one of these days!
Top

Yep, I had a Norse paddle for a lot of years. Forgot to tie it down once and drove away. It flew off on a busy street and was run over. Bent the shaft (aluminum core), but hey, no problem! Put it in the bench vise and straightened that sucka' right out. So then it was only "wavy"...which is only appropriate for a whitewater paddle...wavy. Inlaid metal reinforcement on the blade tips, too, which you can see on Tom's paddle in the photo. Stout paddle.
Let there be rain!
Top

Hey Gordon, I'll jump in with you. Let's go really Old Skool and jump in a 16' Grumman and throw in a big cooler of beer. If that's too far back, I've got an old Mohawk tandem that won't make me cry if it gets wrapped. We can stuff it with styrofoam or innertubes.
Top

"Endeavor to persevere." And when we had thought about it long enough, we declared war on the Union.....
Chief Dan George in The Outlaw Josey Wales 1976 https://www.youtube.com/watch?v=hRX6hSGeZs4
Top

Oh yeah. I see a challenge forming. How about we declare a Retro Day on Richland. Go total old school. Wetsuits, tandem canoes, no stinking weeny a** bilge pumps. Only clorox bottles as bailers. Innertubes and styrofoam floatation optional. Tim Man, get the Mohawk ready this might be it's swan song but it's better to burn out than fade away!! Roger......... you and Dodson better tighten up the straps cuz this is gonna be fun!!

We will however need some old school rescue boys cuz these new paddlers don't know diddly about z drags and such.
Skoboten!
Top

Gordon Kumpuris wrote:Oh yeah. I see a challenge forming. How about we declare a Retro Day on Richland. Go total old school. Wetsuits, tandem canoes, no stinking weeny a** bilge pumps. Only clorox bottles as bailers. Innertubes and styrofoam floatation optional. Tim Man, get the Mohawk ready this might be it's swan song but it's better to burn out than fade away!! Roger......... you and Dodson better tighten up the straps cuz this is gonna be fun!!

We will however need some old school rescue boys cuz these new paddlers don't know diddly about z drags and such.

The earth is like a spaceship that didn't come with an operating manual.
Buckminster Fuller
Top

Straps? We ain't got no stinking straps in the Mohawk! It does have neoprene knee pads. I've got some old Extrasport pfd's too.
Top

The Significance of Twist Ties - Part 2

Like I said earlier, my uncles used that car-hood boat to fish on pretty much all of what I call the “Fallsville” streams – Kings, War Eagle, Buffalo, Piney. I don’t remember them mentioning if they made it to the Mulberry or White Rivers, but wouldn’t doubt it. But I do remember a couple of their "fishing stories."

First story…My uncle Claude had taken the boat down to the lower Big Piney. He and whoever he was with had had a good day of fishing – a REAL good day. They were drifting down close to Highway 64 - before Interstate 40 was built - and soon met a guy in a fancy new fiberglass motorboat headed upstream. The guy in the motorboat cuts his motor and asks the universal fisherman question, “Doing any good?”

My uncle calmly sets down his fishing pole and pulls up their stringer, which is heavy, mostly with big smallmouth bass, the biggest ones weighing five or six pounds. When Motorboat Guy sees this, he almost falls over, and starts stuttering, “L-L-L-Look at those fish!!! AND LOOK AT THAT D_ _ _ ED BOAT!!!” They got a big laugh out of that.

Second story…My uncles had always heard about how good the fishing was over on the Buffalo. So one spring day, three of them loaded the boat in the back of a pickup and drove over the mountain to Boxley. They stopped in at the old Casey store, which was on the east side of Highway 21, just south of the Moore Creek bridge. They asked about river access, and could they get some help setting a shuttle? The guys at the store seemed to want to be real helpful, so they set shuttle, leaving the pickup at the Ponca low-water bridge, and headed up for a put-in at the Boxley bridge. The guys from the store probably said something like, “You fellers have fun!” and took off.

My uncles hauled the boat down to the edge of the water, loaded their gear, and shoved off. They realized right away they weren’t going to be doing any fishing. The river was up, of course, and it was all they could do to keep the boat upright, under control, and bailed out. They somehow made it down to the Ponca bridge, and after loading up, drove back to the store. Their shuttle drivers were sitting outside the store with big wide grins on their faces, and asked how the fishing was. My uncles realized they’d been set up, and weren’t in much of a talking mood, but still laughed about it all those years later.

I asked Uncle Claude whatever happened to the boat. Turns out those car hoods were recycled one more time and the boat became a planter on the top of the big cellar at my great-grandparents’ house there in Japton. 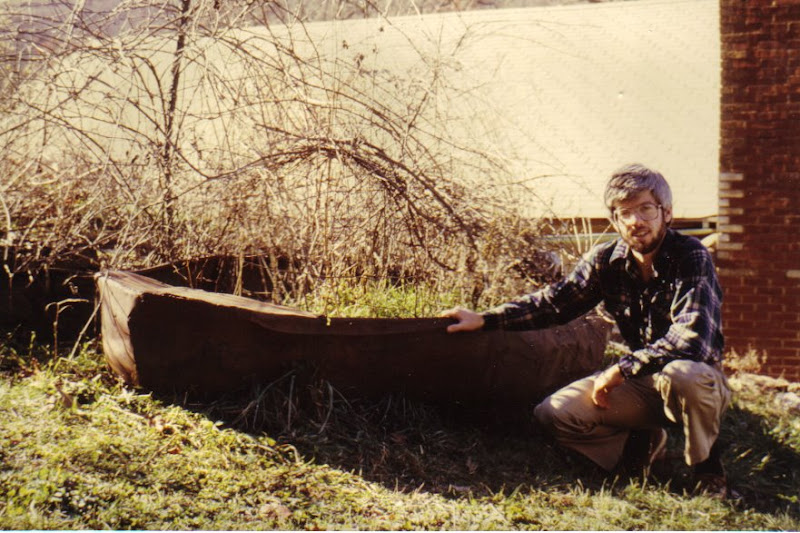 This is how it looked sometime in the mid-eighties when I found out about it. It's pretty wide - not sure it would fit through Crack in the Rock or one of the "doors" at Lower Screw-up on Richland...

I was back in Japton for a family reunion a few years ago and asked about the boat again. The dirt had been emptied out and the boat had been hauled off down by the creek nearby, a long stone's throw from where it was built. I went down and found it in the weeds, rusted away and all but gone, in the bottomland of Drakes Creek.

If that boat could talk, I’m sure it could tell a lot more stories. But I’m glad I was able to learn a few first-hand from my uncles – good memories I’ll never forget.
Let there be rain!
Top

Yeah, that's me at Rattlesnake Falls. Not sure who else ever ran it, but I only ran it that one time. It was not a clean landing. A probe of the pool at that level indicated it was about 6 or 7 feet deep at its deepest point. The falls spreads out thin at the lip and my boat hung for a fraction of a second on a shallow spot. Lucky I didn't get spun or anything, but I only had room for one big stroke and tried to pull the bow up into a big time boof as I went over the lip. On the video it looks like I might make it and then the boat quickly rotates down vertical. A 9 foot boat meeting 7 feet of water is not good. I hit some kind of hard and the boat bounced straight back up off the bottom. The cockpit flexed on impact enough to blow my skirt, and I swam out. The amazing thing was I wasn't hurt more badly. My neck was sore but that was about it. We boated down the rest of the 1/4 mile section before Hurricane and carried back up. The next day, my neck was stiff and both thighs were solid blue and purple. The creek boat was undamaged, but it seems to have transfered the impact to my thighs which probably saved my back from breaking.

I haven't run another fall that big into shallow water again and don't plan to. If the bottom of the creek had been solid rock and not pea gravel, I'd have been hit way harder. I had run several 25 to 30 footers into less than 8 feet of water, but that one convinced me that I had used up all of my nine lives running that type of drop. At higher levels, there's more room for error... but I'll be running the camera next time.

Here's one of Shelby on Lee Cr. in the Noah Jetti:

Here's one of the old-school Buck-N-Flush hole on Lee Cr. I think that's my first a** kicking in it in my 1990 model Dagger Response:

Here's one circa 1990 at Fisher's Ford, Kevin Fendley in a Corsica S (Mason R. in the background in a pink Dancer):

Here's Beech Cr. at Beech Ball sometime in the 80's with Jeff Green in a long boat:

And Dog's old Mongoose on Whistlepost in the 90's. Too bad the access to this one got cut off! :

And one of my all-time favorite shots, Shelby at Blue Light Special on Shop Cr., I think in an Infinity Quantum (?):

And for you open boat fans, here are Steve Robertson and Micah Adams on upper Kings quite a while back:

I think I posted these several months ago, but here's a few Shop Creek photos from the 2nd D back in 1995. 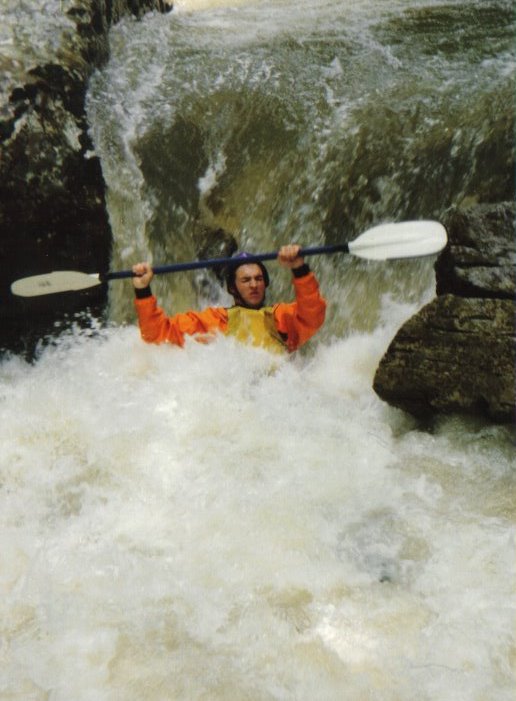 Randy Barnes, nice drop coming out of the gorge. 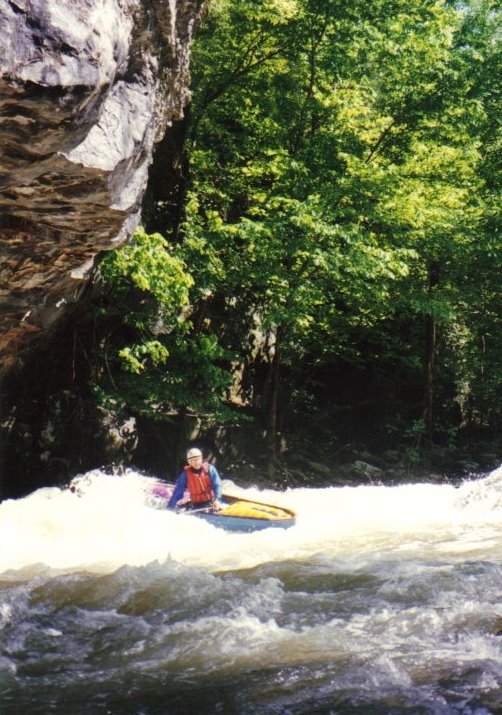 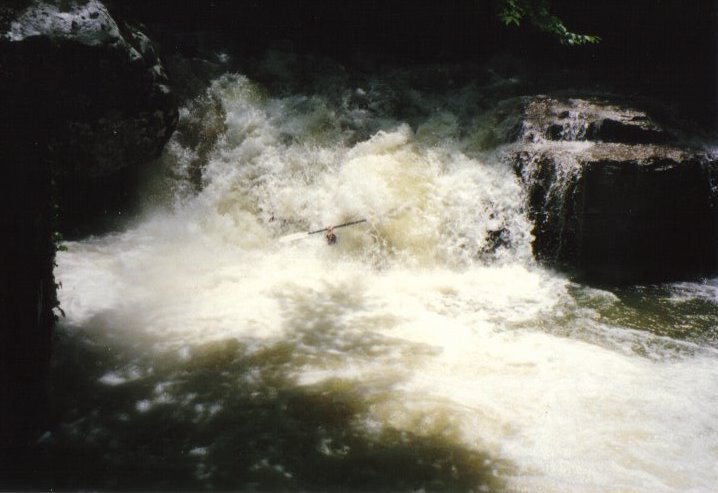 The Crew - Steve Daniels and me up front; Shelby, ?, Randy Barnes, Mike Waggoner, and Wade "Once a Year" Colwell in back. Man, THAT was a great day of boating! Juices me up to go back. 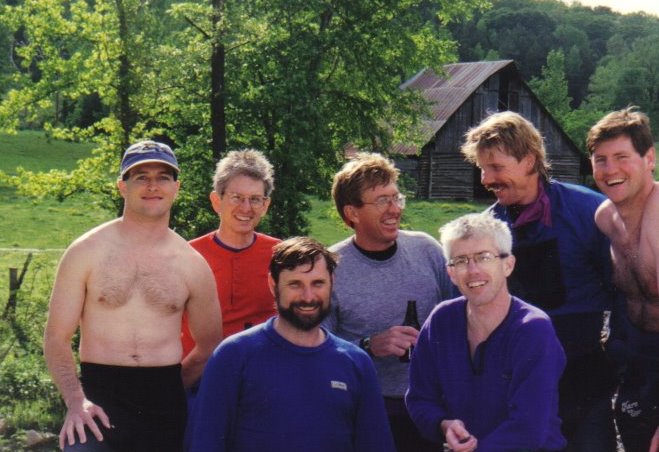 Let there be rain!
Top

There aren't any pics, but I have confirmed another car hood canoe in the same part of madison county as Randy's family. Its location now isn't known, but it was in good shape until the 1980's at least. This one was owned by Ernest Anderson and used on the War Eagle river.

Madison county may have been ahead of its time in canoe concepts.

Thanks Fish for the first hand report of your
run off rattlesnake falls, that's what I wanted
to hear.

Users browsing this forum: No registered users and 2 guests